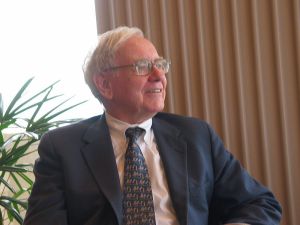 1985 saw violent earthquakes in Mexico City, a deadly cyclone and storm surge in Bangladesh, and rampant starvation in Ethopia. Planes it seems forgot how to fly. In the stock market, the S&P 500 opened the year near 165, bolted from the gate, and finished the year strong, near 210.

Over at Berkshire, their net worth gained $613.6 million, or 48.2%. Over twenty-one years, Buffett and Co. have now grown Berkshire’s book value from $19.46 to $1643.71, or 23.2% compounded annually. Following his habit of managing expectations, Buffett reminds his fellow owners that neither performance will be repeated again, particularly since he confesses that “we cannot find significantly-undervalued equities to purchase for our insurance company portfolios.” I think we all know where the market went from here.

The typical iconoclast, Buffett opens his letter with the suggestion that Berkshire’s stock may be overvalued. Perhaps I’m too green for not knowing better, but has any other CEO ever insinuated as much about his own company? In the past, with its shares trading at a discount to their intrinsic value, Berkshire’s buyers “could be certain that their personal investment experience would at least equal the financial experience of the business. But recently the discount has disappeared, and occasionally a modest premium has prevailed.” Watch out below, sub-23% returns are ahead.

The bulk of 1985’s gains ($338 million pre-tax out of a total of $488 million) derived from the buyout of Berkshire’s shares of General Foods, but these gains should not be used to assess the year’s performance. In a way, “security profits in a given year bear similarities to a college graduation ceremony in which the knowledge gained over four years is recognized on a day when nothing further is learned.” And in this case, the story began in 1980, when General Foods—a business with excellent economics and an able management—traded far below its intrinsic value. “Graduation day” found Philip Morris willing to pay full price.

Here lies an important lesson for investors trying to value insurance companies who carry substantial equity portfolios. Reported annual earnings do not usefully track the growth in the equities’ intrinsic value, for the accumulated gain in business value only shows up on the income sheet when the equity is sold. If the investors’ preferred holding period is “forever,” operating earnings will forever fail to capture true owner earnings.

Over at Berkshire’s mills, the looms went silent for the last time. Textiles, as Buffett came to recognize, operate in a commodity business, one which has to compete with cheap foreign labor. Even with Berkshire’s workers paid less than others in American industry, and even with reasonable union contracts, the returns were not sufficient to keep the lights on. Though Buffett wouldn’t “close down businesses of sub-normal profitability merely to add a fraction of a point to our corporate rate of return… [he felt] it inappropriate for even an exceptionally profitable company to fund an operation once it appears to have unending losses in prospect. Adam Smith would disagree with [the] first proposition, and Karl Marx would disagree with [the] second; the middle ground is the only position that [left Buffett] comfortable.”

Of course, defeat bluntly discloses important lessons. And here, Buffett observes that book value, by itself, has little value for determining a business’ intrinsic value or liquidation value. In winding down the mills, the equipment went to the auction block, equipment which “took up about 750,000 square feet of factory space in New Bedford and was eminently usable. It originally cost [Berkshire] about $13 million, including $2 million spent in 1980-84, and had a current book value of $866,000 (after accelerated depreciation). Though no sane management would have made the investment, the equipment could have been replaced new for perhaps $30-$50 million.” So how much did the sale yield? $163,122. “Allowing for necessary pre- and post-sale costs, [Berkshire’s] net was less than zero. Relatively modern looms that we bought for $5,000 apiece in 1981 found no takers at $50. We finally sold them for scrap at $26 each, a sum less than removal costs.” Liquidations do not always live up to their name.

Buffett the student though is not satisfied to take one lesson alone–moving quickly to discuss appropriate managerial compensation in light of this example.  Here, “the economic goodwill attributable to two paper routes in Buffalo – or a single See’s candy store – considerably exceeds the proceeds we received from this massive collection of tangible assets that not too many years ago, under different competitive conditions, was able to employ over 1,000 people. The power of this simple math is often ignored by companies to the detriment of their shareholders. Many corporate compensation plans reward managers handsomely for earnings increases produced solely, or in large part, by retained earnings—i.e., earnings withheld from owners.” If compensation derives primarily from ten-year, fixed-price options that totally ignore the fact that retained earnings automatically build value, one can imagine another Berkshire executive getting praise for growing a dying textile business by buying more efficient looms and assets. This, even though ever increasing piles of shareholder capital are squandered in low-return endeavors [for a Buffet-esque alternative, see Robert Moore’s compensation agreement with Western Sizzlin].

As the story goes, Buffett didn’t offer Ken Chace Berkshire shares or options for his excellent work managing the mills. However, he did offer to loan Chace whatever sum he wanted to purchase Berkshire shares. And perhaps now the reason is clear. “The rhetoric about options frequently describes them as desirable because they put managers and owners in the same financial boat. In reality, the boats are far different. No owner has ever escaped the burden of capital costs, whereas a holder of a fixed-price option bears no capital costs at all. An owner must weigh upside potential against downside risk; an option holder has no downside. In fact, the business project in which you would wish to have an option frequently is a project in which you would reject ownership. (I’ll be happy to accept a lottery ticket as a gift – but I’ll never buy one.)”

1980 saw an actor nominated for the Presidency of the United States. Children and adults, flocking to video arcade games, became seduced for the first time by Pac-Man. Art lost a lyricist outside The Dakota building in New York City. And the S&P 500 Index finally lurches free from its range-bound antics around 100, finishing the year over 135.

Over at Berkshire, “operating earnings improved to $41.9 million in 1980 from $36.0 million in 1979, but return on beginning equity capital (with securities valued at cost) fell to 17.8% from 18.6%.” Yet, Buffett quickly notes that accounting practices far understate Berkshire’s share of its common stocks’ earnings. For those businesses that Berkshire owns less than a 20% stake, only dividends show up on the earnings statement; since dividend payouts represent only a small fraction of their earnings power, much of Berkshire’s value as an owner doesn’t find its way onto its balance sheet. In fact, were Berkshire to sell all its equities and pour the proceeds into tax-free bonds, Berkshire’s reported earnings would nearly double, adding at least $30 million annually.

But shouldn’t Buffett want a greater share of GEICO’s earnings annually deposited into Berkshire’s coffers? Absolutely not. As Buffett observes, “we should emphasize that we feel as comfortable with GEICO management retaining an estimated $17 million of earnings applicable to our ownership as we would if that sum were in our own hands. In just the last two years GEICO, through repurchases of its own stock, has reduced the share equivalents it has outstanding from 34.2 million to 21.6 million, dramatically enhancing the interests of shareholders in a business that simply can’t be replicated. The owners could not have been better served.” Despite relatively difficult economic conditions, GEICO bought back more than a third of its shares. Compare that to others’ recent performance.

Much of Buffett’s remaining reflections cheerlead his various managers and eulogize his friend and banker Gene Abegg, past owner of Illinois National. At National Indemnity, business looks lighter with industry-wide premiums softer, but Buffett sounds content—“while volume was flat, underwriting margins relative to the industry were at an all-time high. We expect decreased volume from this operation in 1981. But its managers will hear no complaints from corporate headquarters, nor will employment or salaries suffer.”

Over in reinsurance, Buffett forecasts ominous clouds rising soon over the horizon. With “the magnetic lure of [reinsurance’s] cash-generating characteristics, currently enhanced by the presence of high interest rates… the reinsurance market [has transformed] into “amateur night”.”

All told, Buffett says little about competitive advantages at this, the dawn of the Eighties. Berkshire’s mills, a high capex and low margin business, has trimmed its workforce and idled some looms. Inflation, torturous demon of prudent capital allocation, slowly stripped Berkshire of some of its relative value as an investment vehicle. “In a world of 12% inflation a business earning 20% on equity (which very few manage consistently to do) and distributing it all to individuals in the 50% bracket is chewing up their real capital, not enhancing it.” For even the best businesses, with the best competitive advantages, consistently high inflation requires abundant managerial skill while at the same time crippling investors’ real returns.